In the past, and sometimes, still you are given directions to places known by any other name than the real name.

It’s an old joke in movies… “drive down a ways, past Johnson’s Farm and make a left at dead mans’ curve, don’t go right now… Then, once you go past the lake, you should be, oh, about another 20 minutes before you get there. Good luck!”

Otherwise known as the gas station, which you hope you get to before you run out of fuel.

Well, that used to be a book store, but then it was an Eckerd.

Now it is a Rite Aid.

Go down where the dairy barn used to be, before they sold it to developers and then there was a fancy place that had s’mores you could make at the table. What was that place called?

It was called COSI, but now it’s a Zoe’s Kitchen.

You used to be able to get cupcakes there, but then you could get fancy french pastries…but they were rarely open when you wanted one. Now you can get jam and a whole bunch of other crafty stuff – oh, and eggs from the farm.

We got two eggs with double yokes in our last dozen! No kidding.

The other day I was driving home from a meeting and as I was coming up to the corner, the map told me that the store on the corner is now known as “Flu Shots” as if the Walgreen’s should want to be known by any other name but their brand-name… besides, I thought they were just called “At the corner of Happy and Healthy.” Well, I guess that was too long to put on the Waze map and doesn’t really tell you want you’ll find; but, it is still clever. 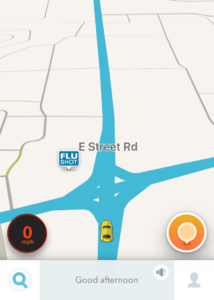 Thought it was the corner of Happy and Healthy…