Marketing is all about grabbing the attention of the customer, or should I say, the potential customer and turning them into a buyer. You may not be able to appeal to everyone. Not everyone needs nor wants your product or service. The other day I saw a very simple statement on a promotional sign. I have recreated it here, that’s how simple it was – I didn’t even use a design program to create this image… 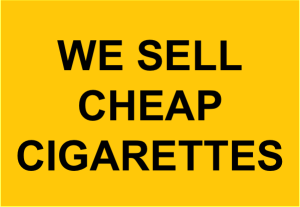 This gets the point across, don’t you think?

No complicated graphics. No brand logos. No pricing, (yes, there is the implication of pricing, but nothing that has to change if the costs go up, or the taxes increase, or you got a better deal from one manufacturer or another.)

I don’t smoke. This doesn’t appeal to me. I wouldn’t have even looked at it except that…

In 1999, I spent the better part of a year (maybe even longer) on a project where we spent over $10 million to install complicated merchandising racks, with brand logo signs, price tags and easy feed shelving to display cigarettes. We had to relocate cigarettes behind the counter and install WE CARD signs in conspicuous places at the sales counter. It was all mandated as part of the MSA agreement against the tobacco companies.

We would NEVER have made such a simple statement, like the one shown above. Furthermore, we would not have placed it anywhere near our store or our displays. It wasn’t the image we wanted to project. Flash forward a decade and few years, become an independent fuel retailer and add state and federal taxes making this habit a bad idea for financial reasons, too. Today, this probably works better; if all you want to do is sell as much as you can, get people in the door to buy what they need – as long as they don’t care about anything but price.

PS At $6.85 per pack as of August 2014, the State of Pennsylvania is the 20th most expensive state selling cigarettes. New York is nearly double that price and is first in this “illustrious” list. We used to promote discounts for cartons, but who would buy a carton at $60 each these days – and if you did would it be cheap?