Often, one thing leads to another.

One mention of an idea, for example, a new way to serve hot dogs. Boom, gourmet hot dogs are everywhere…Sure it was on the cover of a magazine, right before the summer kicked off in May. Now Target and other retailers, food magazines…grocery stores all have ideas on how to make the summer grilling staple, even better.

At least, this one thing is, in general, a good thing…even though I have already told you that they’re probably better served up in the most simple way. Of course, that was before I met these; these are special dogs. You probably can’t even tell, but look closer and notice that they are spiral cut! Look out summer, your hot dog has a whole new twist! 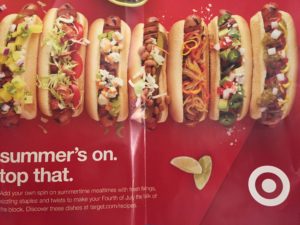