Literally, just one day after I commented on our restaurant, passing on the well known national brands for their own version of craft soda, I see this sign at Starbucks. 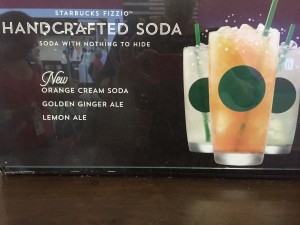 I didn’t see it until I picked up my beverage (not that I would have selected something different…but,) I didn’t see it listed on the menu – because I knew what I wanted and ordered accordingly.

Just three favors “with nothing to hide”.

Except maybe their price tag… Not that I would complain – or maybe I would – but probably not. I just paid $4 for an iced tea that I finished in about 2 and a half minutes.They do use a lot of ice in their iced tea…but – they probably don’t add the pricing info so they don’t have to pay for more variety of signs through their printer for the variety of locations (company operated, licensed affiliates, controlled access venues – pricing matters when rent is different aka higher.) Or, maybe, since it is a test, they don’t know what people will be willing to pay…let alone if they will want to order it often enough to add Fizzio to the menu.

So. Are we starting to fight the big soda war fight with new options for craft soda in all our favorite places? Less sugar (never HFCS, real flavorings (not artificial) and maybe an adjustment to the level of fizz for this (hmmm is it caffeinated?) buzz. I have to wonder if their breezer refreshers were a market test to see if there would be an interest in a non-coffee, non-tea, caffeinated or not, all natural pick-me-up and refreshing beverage.Hmm – Fizzio. Now you know.