I know that this is Friday night and it is mischief night…we missed the full moon by just a couple of days but things are still weird. Tomorrow is Halloween and unfortunately, our son broke something; yes, it was the big toe.

I jinxed it. I took him to karate, it was “Halloween” night and they were practicing katas but also playing a few more fun games. It was merely 30 minutes after I mentioned that he only had three classes left and a few more assignments to master before he would be able to promote next month.

No private make up lessons. No shuffling the schedule around to make 4 classes in one week (typically they are supposed to do two to three.) No waiting until next time to show that you knew it all way back then…

So, we had the joy of going to this store that we always pass to and from my sister in law’s house. It makes an impression.”Everything You Hope You Will Never Need.” 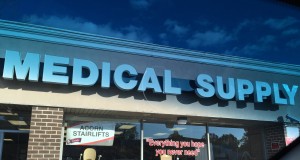 “Everything you hope you never need.”

Yes. They even sell something for recovery of a broken toe.

I know it hurts. A lot. I am guessing right now that he won’t be walking around too much tomorrow night in the cold. Too bad he already had his costume in mind (and in hand…all my worrying for naught. In the end the costume wasn’t anything.)

Maybe I should have been thinking about the big toe instead.