No secret, many people love art – even if they can’t own it – they do appreciate it. It makes people think. It makes them remember. It brings us together. It makes sure that we never forget our history. It inspires people to try to be better and to change the future.

Yesterday when I was in New York City, I snapped a quick pic of the HOPE sculpture (which was created by Robert Indiana, by the way) simply because it was like the LOVE sculpture, which is well known as a symbol of Philadelphia. You know, The City of Brotherly Love.

His mission, as an artist, was to make people come together to make a difference.

This particular sculpture inspired International HOPE Day, which originally “launched” on September 13, 2014 the same day his HOPE sculpture was installed in New York City. Perfectly placed – just a few blocks from Central Park – one of the most visited areas of the city and in all probably, the world.

His work of heart – the LOVE art sculpture inspired him in the 1960s to  inspire others… and it was nice to find out that  is not just in Philadelphia, but in several other cities, including New York. I believe the entire country is thinking of NYC this weekend; if they are not, they should be. It is now, fifteen years later and I do believe that we are all wishing there was more of both, LOVE and HOPE, in our hearts, in our country and in the world. 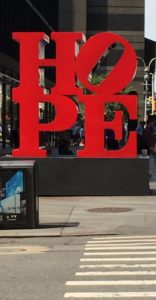 NYC and the world have HOPE