The Levittown community, built in the 1950’s, is a community designed and constructed by Levitt & Sons. These neighborhoods, found in NY and PA (others were planned, I don’t know if they were ever built) became famous as the model for suburban life. Around here, the sections of the community are locally known, just like others (um, like me) know cross streets and many who know city neighborhoods in NYC, Philly, Chicago, Atlanta and Los Angeles. I think they did a great job of marketing the area to the residents…second and third generations still call their neighborhood by the section or area name given by Levitt & Sons.

Even though I have lived in this area for 25 years, I still (still) don’t know what people are talking about when they say Red Rose Gate, Forsythia Gate, Highland Gate… Forgive me, you local residents…and keep reading. The town is big, not the biggest planned community in eastern PA, but still well known and thought of as one of the biggest. (It’s famous!! Not because it has a wiki, but because it is historically significant. Some would say infamous, but that’s a whole different topic.)

Today’s traffic kept me in my home office as much as possible, avoiding the growing list of intersections clogged with construction around our area, in our neighborhoods. (I actually grid locked the street today because I thought some one was turning and then they didn’t – UGH! Good thing it isn’t the city, or I would have been fined $200!!) I wasn’t in Levittown today, but someone told me where they lived, matter of factually, like I would know, exactly where he was. I didn’t, but that is OK. If you gave me a cross street or an intersection – outside of the neighborhood – I’d be sure to find it.

Maybe one of these days, I will learn where these places are, the ones that are locally known so very well…or maybe, I won’t. The residents, however; will still feel good about where they live, have grown up and may very well, still live. I don’t blame them. I’m proud of my home town, and the “hill section” where my parents bought their first house and the “park section” where they still live today. I love our little Boro home and our street, our neighborhood that was gridlocked today, yesterday and probably tomorrow.  How would you promote, or label, or market your “neighborhood” if you could? I just call our area the Boro and hope that people know what I am talking about when I say that. If not, I can give them a street name or two…that works, too. 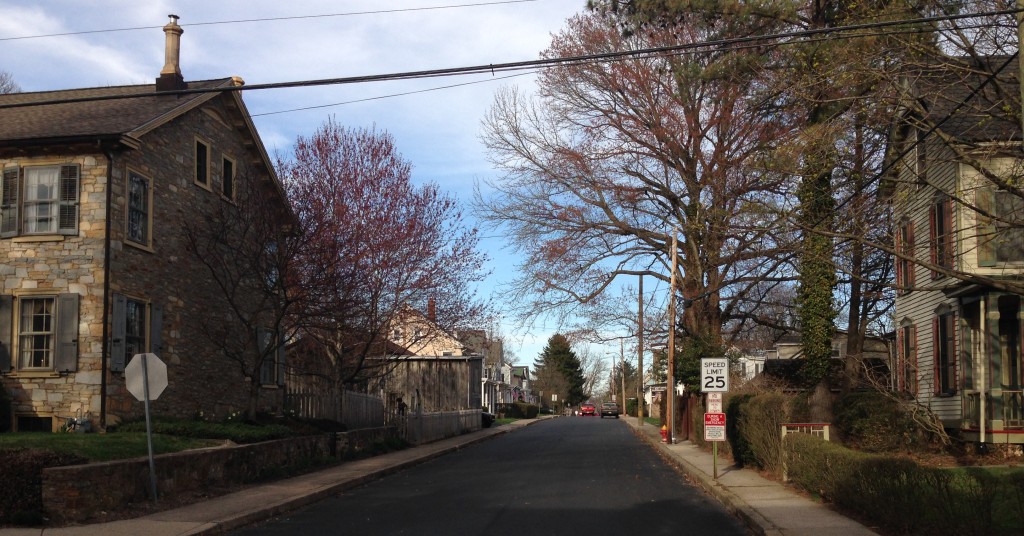 Our Street and our house (in the middle of the street)