Back in January, our decision was resolute. We could no longer support the notion that a fax line mattered. Our two-line, multi-handset phone system had been compromised and we were unable to replace it “exactly” so we were unwilling and frankly finding it completely unnecessary at this point. Let alone having a fax line. So we decided to delete that line “two” as we called it.

My parents had one installed when I was 13. It was the “teen line”. I guess I thought that some day the kids would want their own phone. We even installed a phone jack in our daughter’s room. (Just kidding, it was already there. That used to be my home office.) We even bought her an old fashioned, corded, princess line phone. We called it a “starter phone” – hey, it had caller id.

Then, she turned 10 and we bought her a cell phone.

Then, she moved out of that room and handed it down to her younger sister, who didn’t need a phone line. Besides, she would want a cell phone too some day, right?

We kept it, (the phone) for emergency power outages, and I was still randomly using the other line for faxes or calling the third floor.

Now, it seemed that second line was just lingering. So, as I said… back in January, I called and told Verizon to cancel it. I got a confirmation of the order. They e-mailed me, I accepted the changes. Done.

I called them up today. 1 minute wait on hold. Not bad. A live person. Even better. Quite friendly. Bonus. (Shocking, I know.)

So, I told her (the phone lady), that It was not a joke, we really did want that line cancelled, but for some reason it was still on the account. “Are you sure?”, she said. “You have had this phone line for the past 17 years.” (Right about the time I was approved to work from home…two days a week!)

I said “Yes, delete that line. Oh, and I want the credit for the past 3 months.” I mean…I know it was just $46 but add that up over countless people who have an account and how much they may be over-charging for services not needed, nor rendered, once “canceled”. There have been no calls, in or out, on that line save for my test call the other day when I saw it on the bill. Plus, I hung up before it picked up. I think I was being more than fair and completely serious.

PS Here is the teen line. Way cooler than what I had, or is it? I had one of those hanging wicker chairs. The Papasan chair is much better for hanging out and face-timing cousins; which is way cooler than our emergency phone. 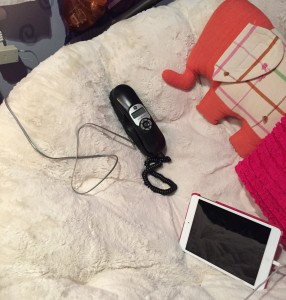